People Pedal CHS is Charleston’s vision for a network of connected bike infrastructure on the peninsula. The network is a collaboration between Charleston Moves and the City of Charleston: namely, the Civic Design Division, the Department of Planning, Preservation & Sustainability, and the Department of Traffic & Transportation. A portion of the data for the system came directly from the 1,300 citizens who participated in the route mapping survey.

WHAT’S IN THE WORKS

The City of Charleston is developing improvements to the segment of Huger Street from Morrison to Meeting, incorporating our design suggestions. Other segments of Huger Street are included in future planning phases, but are not currently being redesigned. It’s important to get enhancements to the entirety of Huger Street right, since it’s a critical segment that will advance the People Pedal Plan and provide a functional link to the Lowcountry Lowline and Lowcountry Rapid Transit, facilitating safer, more comfortable east-west travel for people on bikes and foot.

Check out how Huger Street fits into the network, and please join us for our Bridge Adventure Ride on May 15, 2022. This event serves as an important benchmark for celebrating progress on the new Ashley River Bike/Ped Bridge, and the route will focus on bike/ped destinations and pending improvements on either side of the bridges, including major connectivity needs on the peninsula such as Huger Street.

Make sure to keep up with all the moving parts on our Progress Map!

In January 2022, City staff and Charleston Moves met to further incorporate our design suggestions into the improvements to Huger from Meeting to Morrison. On-street parking has been removed from the design (to avoid dooring).

On September 30, 2021, the City of Charleston hosted a community meeting on their proposed improvements to Huger Street between Meeting Street and Morrison Drive. Charleston Moves advocated for a more appropriate design, including wider bike lanes with green paint, and improvements connecting through the intersections.

On August 10, 2021, the Charleston County Transportation Committee (CTC) approved funding for SCDOT’s safety and traffic operations study for King Street between Line and Huger, as recommended in the Safety Review. Charleston Moves and business owners submitted letters of support.

On June 23, 2021, Charleston County presented transportation sales tax-funded project updates, including the announcement that bike lanes along Romney Street, from King Street to North Romney Street, are under design.

On March 31, 2021, the City of Charleston held a ribbon-cutting celebration to announce the completion of the Brigade Street improvements project … the City’s first protected bike lane! The infrastructure includes: bike lanes on both sides of Brigade; a wide buffer with physical delineators; green paint through the Brigade/Meeting intersection; curb extensions to shorten the pedestrian crossings over Meeting; bike and pedestrian signage; audible signals and ADA-compliant detectable warning surfaces at Brigade/Meeting.

On March 26, 2021, SCDOT convened Charleston Moves, City of Charleston and the BCDCOG to assess King Street between Huger and Line Streets. SCDOT will be preparing a formal report over the coming weeks, that includes observations and recommendations discussed on our walk. There isn’t money set aside for these improvements yet, but having this assessment on hand, agreed upon by these agencies, will help government and advocates be nimble in leveraging opportunities through other projects, as well as making new requests specific to the safety review’s findings.

On January 11, 2020, the Brigade Street improvements project gets another stamp of approval to move forward, thanks to a supportive North Central and East Central neighborhood meeting.

On November 6, 2019, the City of Charleston was officially awarded $18.149M in federal funding to construct a standalone bike/ped bridge over the Ashley River between downtown and West Ashley. With a local match, the total funds for the project come to around $23M, and include upgrades to 3 intersections to ensure safe access to/from the bridge. As part of People Pedal CHS and this project, the Bee/Lockwood intersection will be upgraded for pedestrians and people on bikes.

On August 5-6, 2019, the Charleston Moves team joined SCDOT, Stantec, City of Charleston, Charleston Police Department and Lowcountry Local First for a Road Safety Audit (RSA) of King and Meeting Streets to assess existing conditions and safety improvements for all roadway users. A report is being generated and will be made public around February 2020.

On July 15, 2019, the City of Charleston submitted their 3rd application to fund a bike/ped bridge over the Ashley River between downtown and West Ashley. Charleston Moves was instrumental in facilitating 230+ letters of support from businesses and institutions for inclusion in the application.

On May 30, 2019, Charleston Moves sat down with the City of Charleston Transportation Department, Councilmember Lewis, Councilmember Mitchell and Enough Pie to discuss the status of the Brigade Street improvements project, and next steps.

On March 6, 2019, Line Street is converted to two-way traffic. Sharrows have been installed along the corridor (King Street to Rutledge Avenue), as well as a raised crosswalk at Percy Street.

On August 21, 2018, the Citywide Transportation Plan, which People Pedal CHS is incorporated into, got the green light by Charleston City Council on it’s final reading. Now, these plans have a mechanism for funding, and short-term priority projects will begin to be implemented.

On August 10, 2018, we completed a walking audit of Rutledge Avenue to see how the corridor is functioning (and failing to function) for people on foot and bike. We were joined by neighbors of North Central, Westside, Hampton Park Terrace and Wagener Terrace.

On August 3, 2018, we hosted our first Fresh Paint Ride to celebrate the beginnings of a connected network by touring the sharrows that have been installed so far.

On July 19, 2018, the City submitted the BUILD application, a federal grant to fund a new bicycle and pedestrian bridge over the Ashley River, as this vital crossing is part of People Pedal CHS and connects the City’s largest population area with the largest employment center.

On July 17, 2018, the Citywide Transportation Plan, which People Pedal CHS is incorporated into, got the green light by Charleston City Council on it’s first reading.

As of June 6, 2018, sharrows have been installed on select City-owned streets. To date, they are on Vendue Range, Hester Street, 10th Avenue, Grove Street, Radcliffe Street, Bee Street, Carolina Street and Fishburne Street.

On June 1, 2018, Charleston Moves hosted a rally with Enough Pie, businesses, community leadership and residents in support of a safe intersection at Brigade/Meeting Street. Our vision is to connect Bridgeview Village Apartments to the existing I-26 underpass path and future LowLine, and link to existing bike lanes along Morrison Drive. Click HERE to hear from our community about the dangerous and unacceptable existing conditions, and their plea to make it safe and connected.

On May 16, 2018, the Citywide Transportation Plan (CTP) passed through the City’s Planning Commission, and prior, the Bicycle and Pedestrian Advisory Committee recommended that People Pedal CHS be incorporated into the CTP.

On March 29, 2018, Charleston Moves hosted a kickoff event, during which attendees could review the plan up close, interact with us and city staff, and learn about next steps.

The network’s maps and design toolkit are complete! 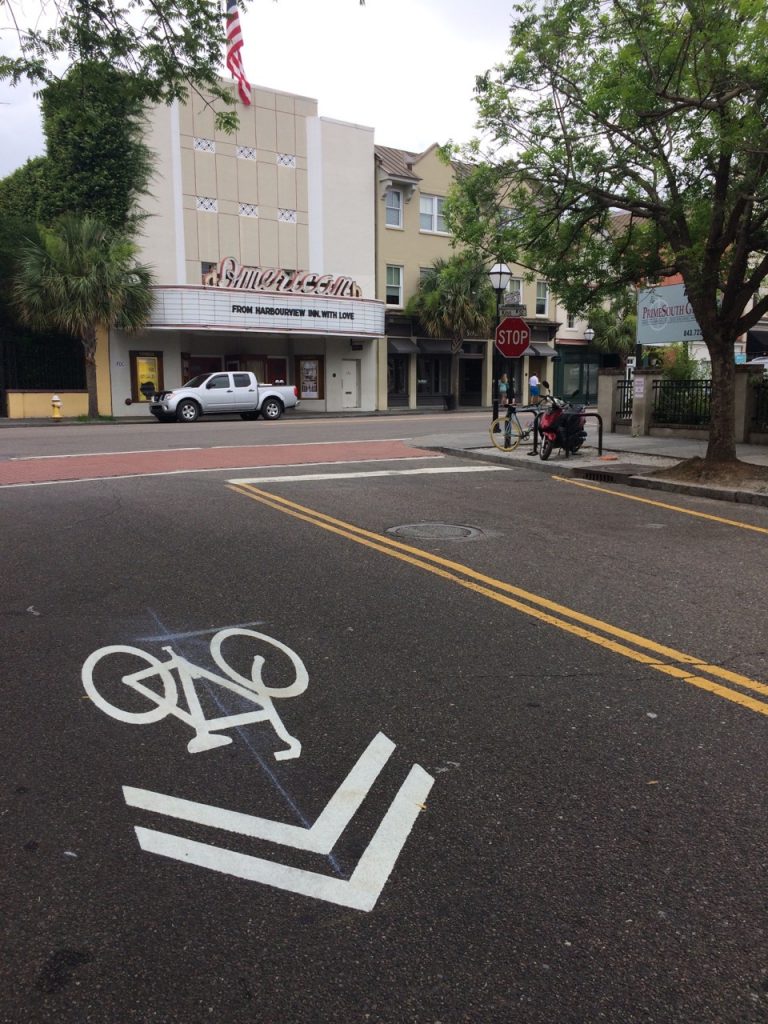 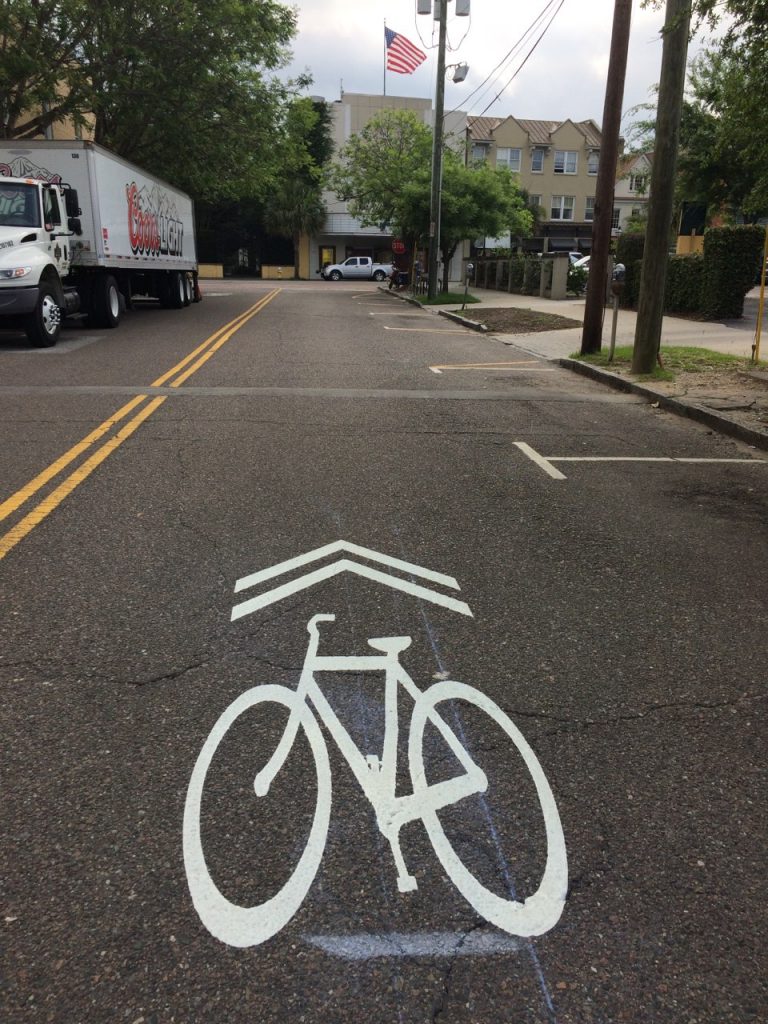 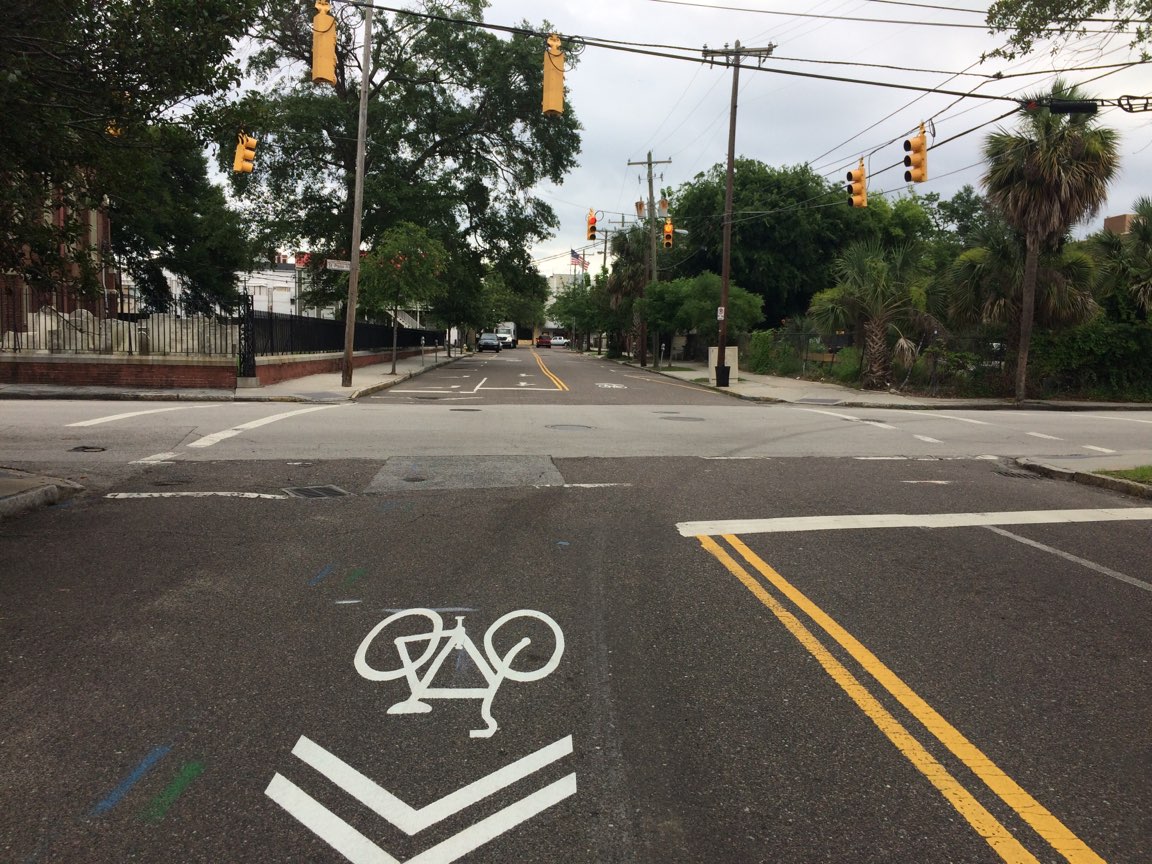 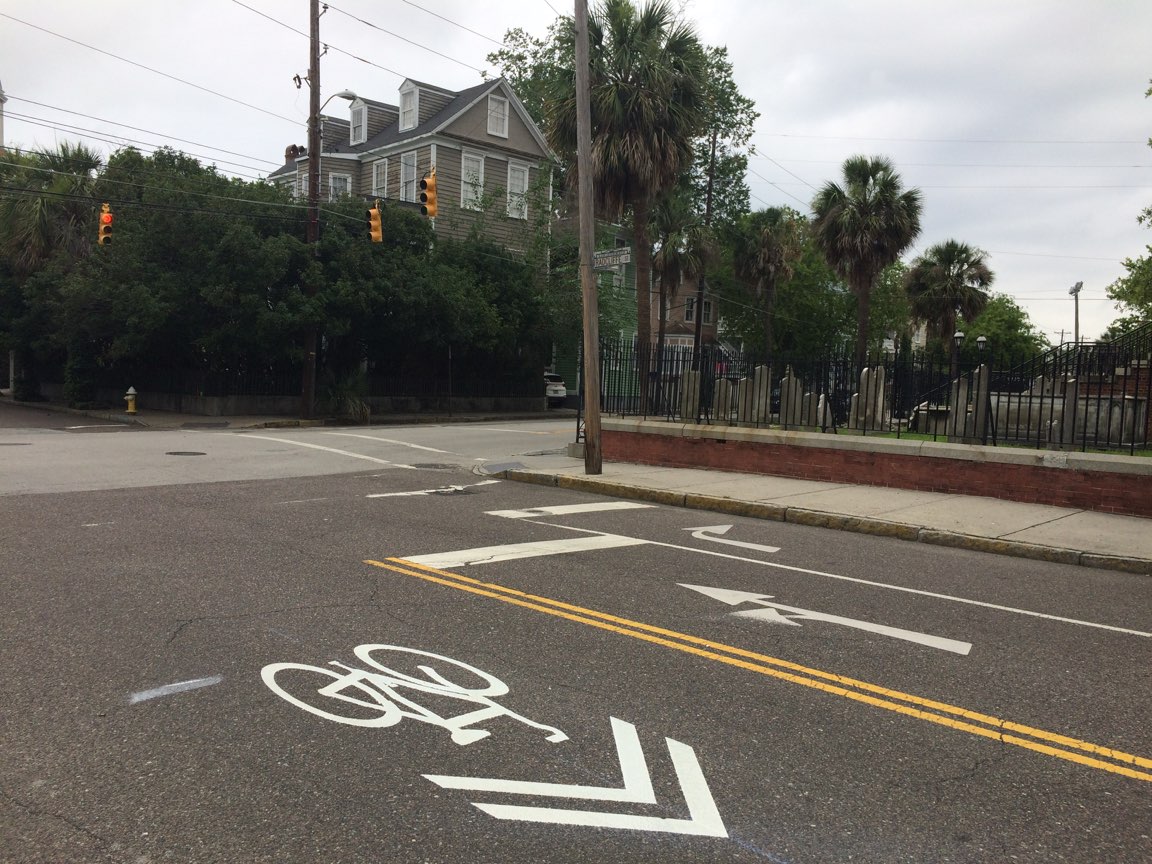 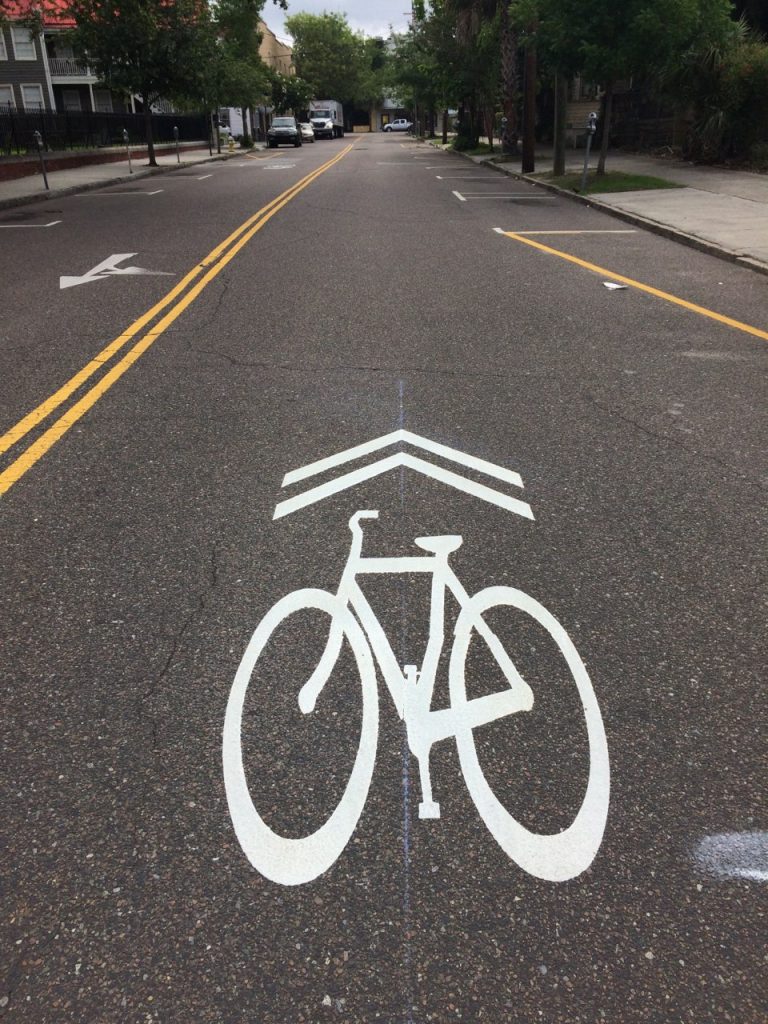 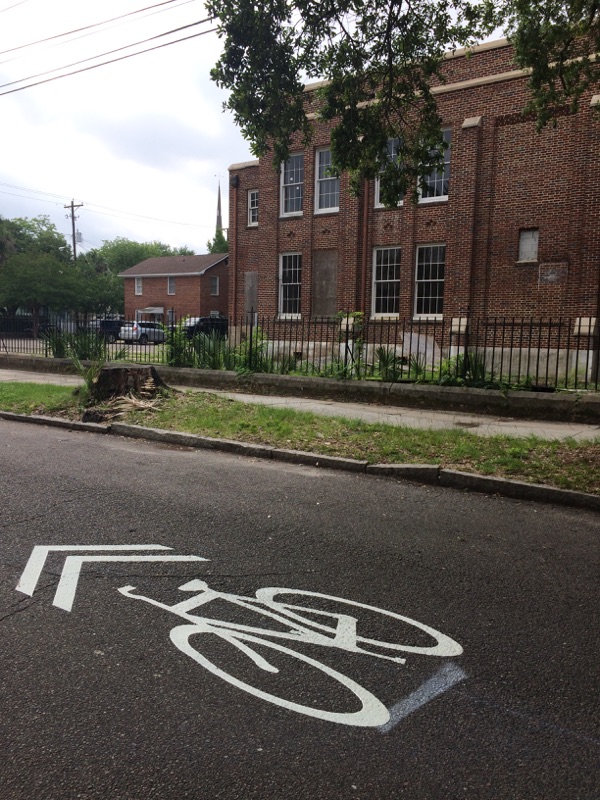 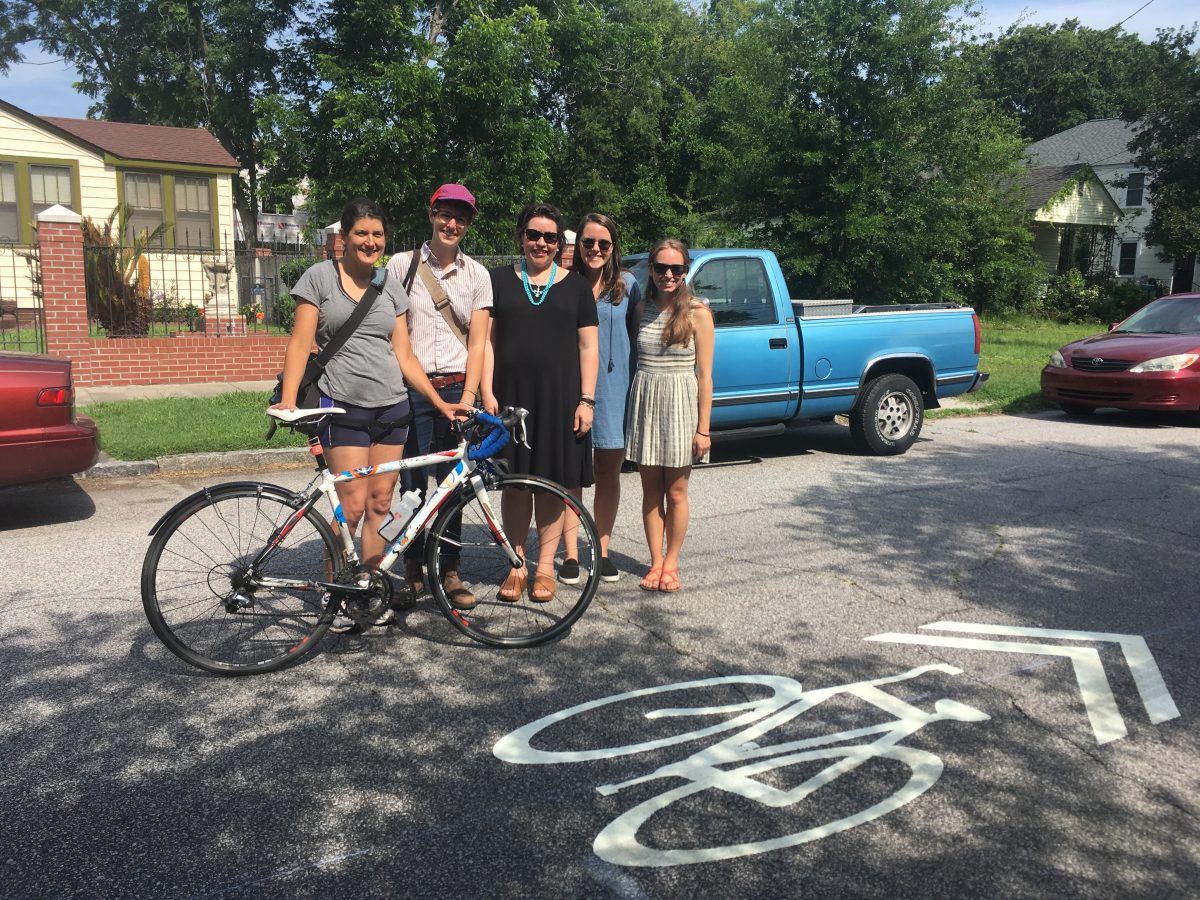 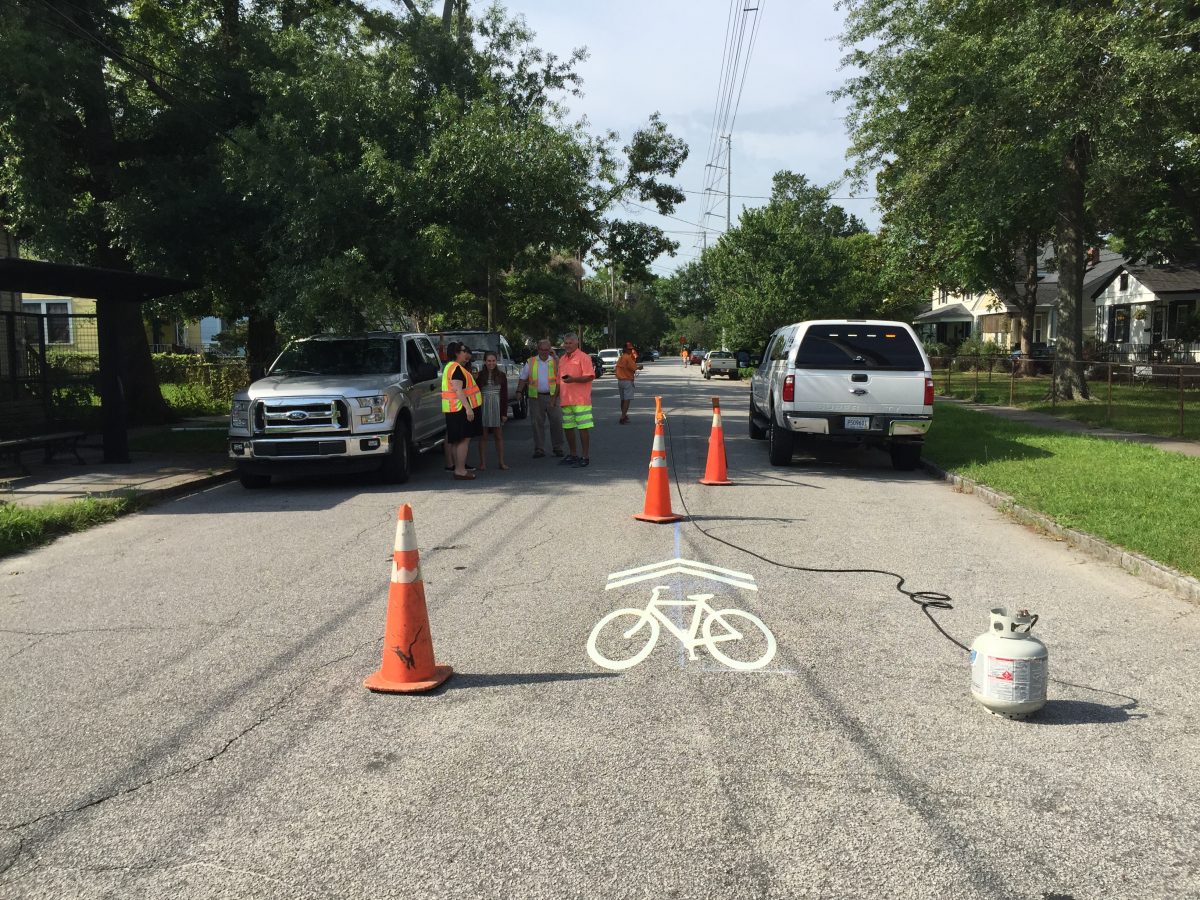 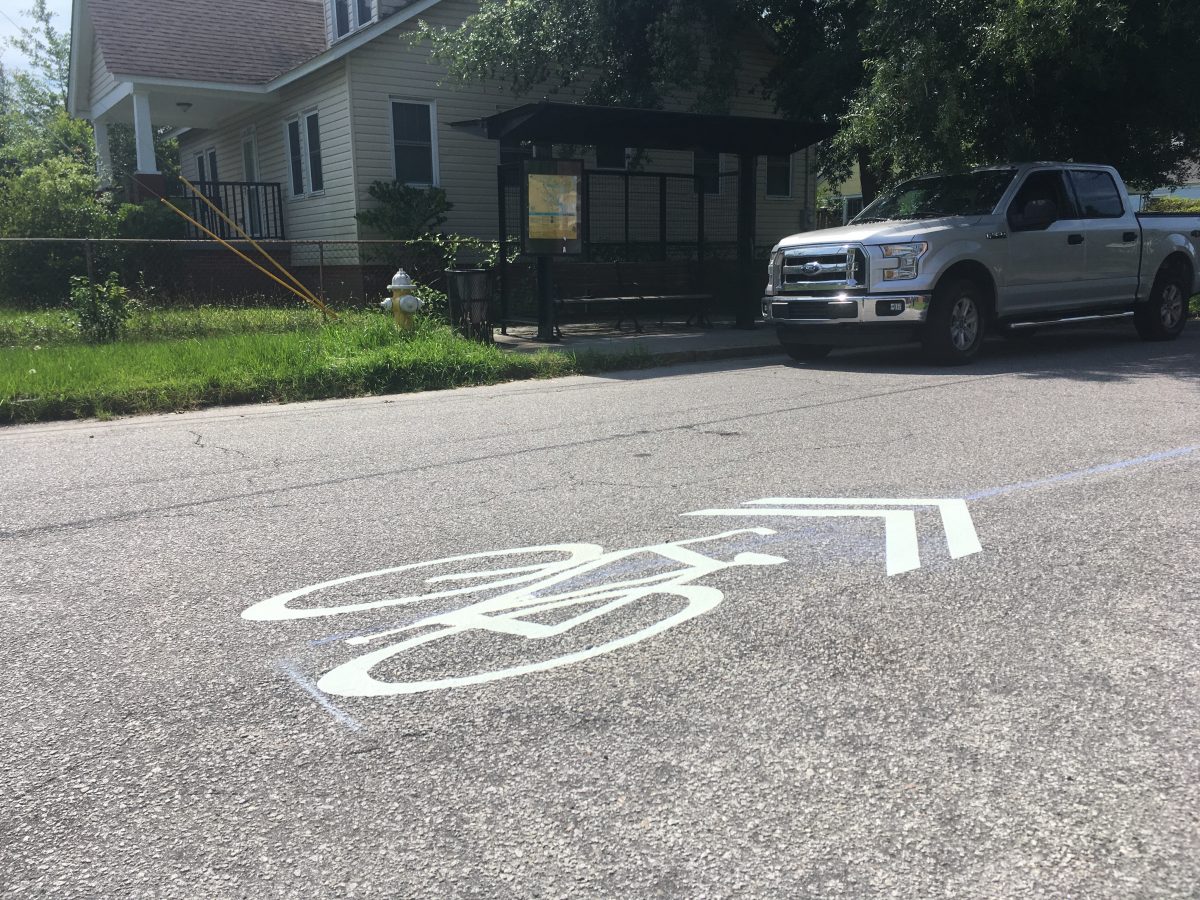 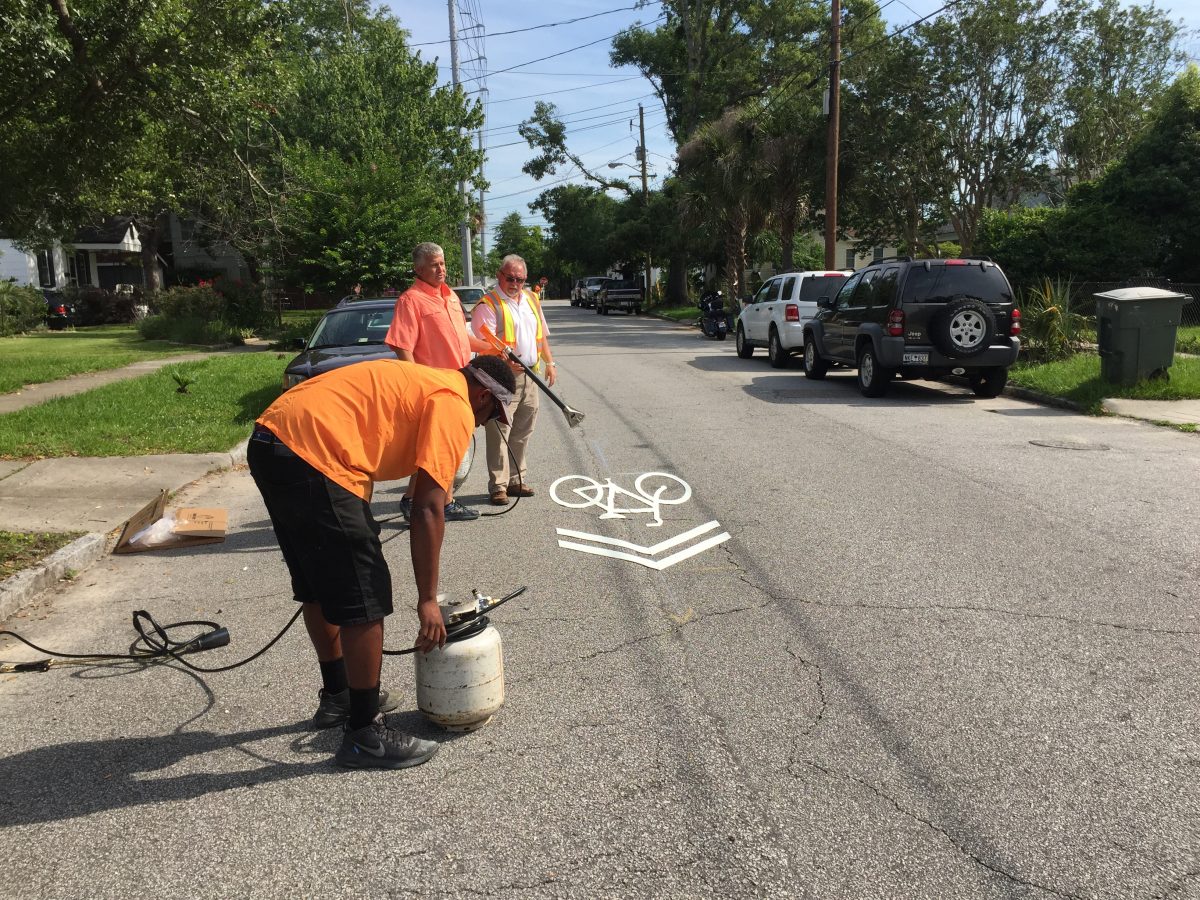 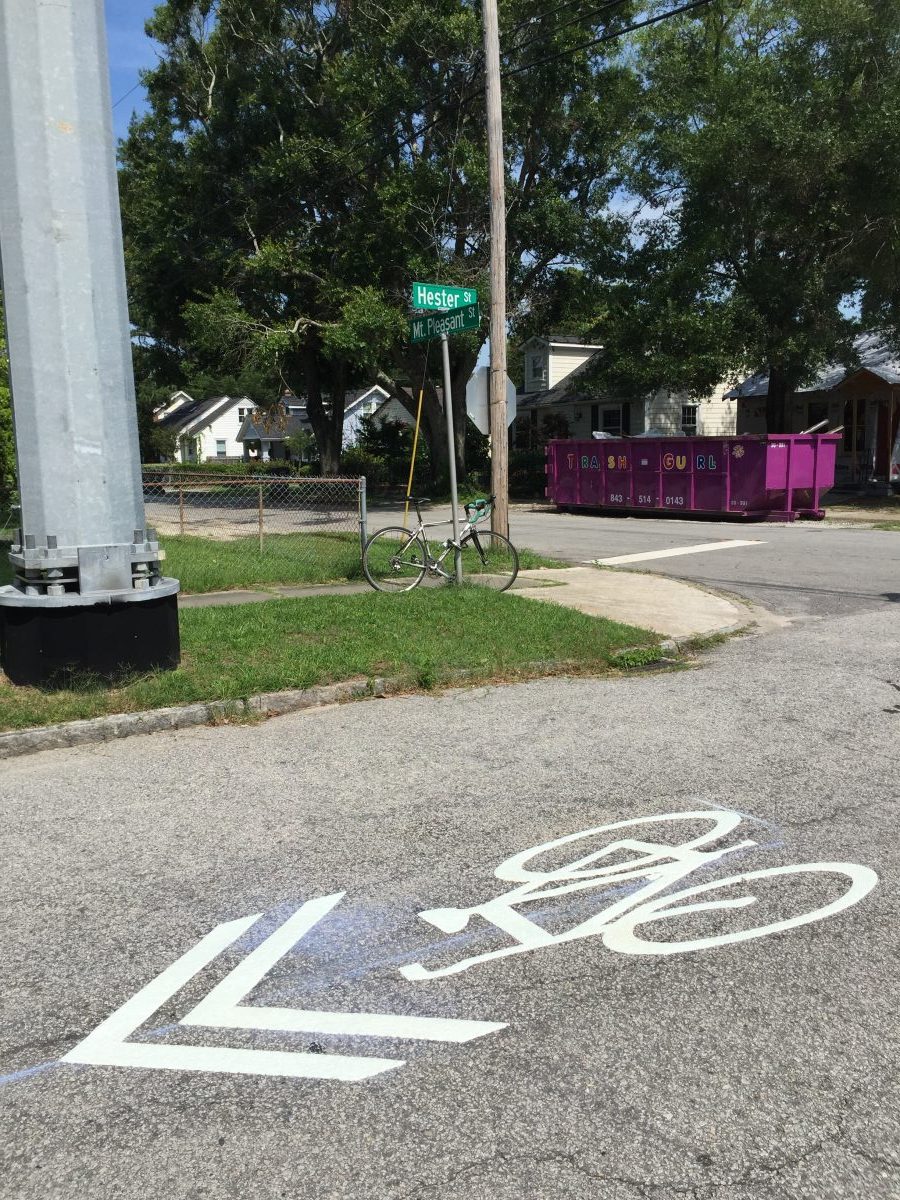 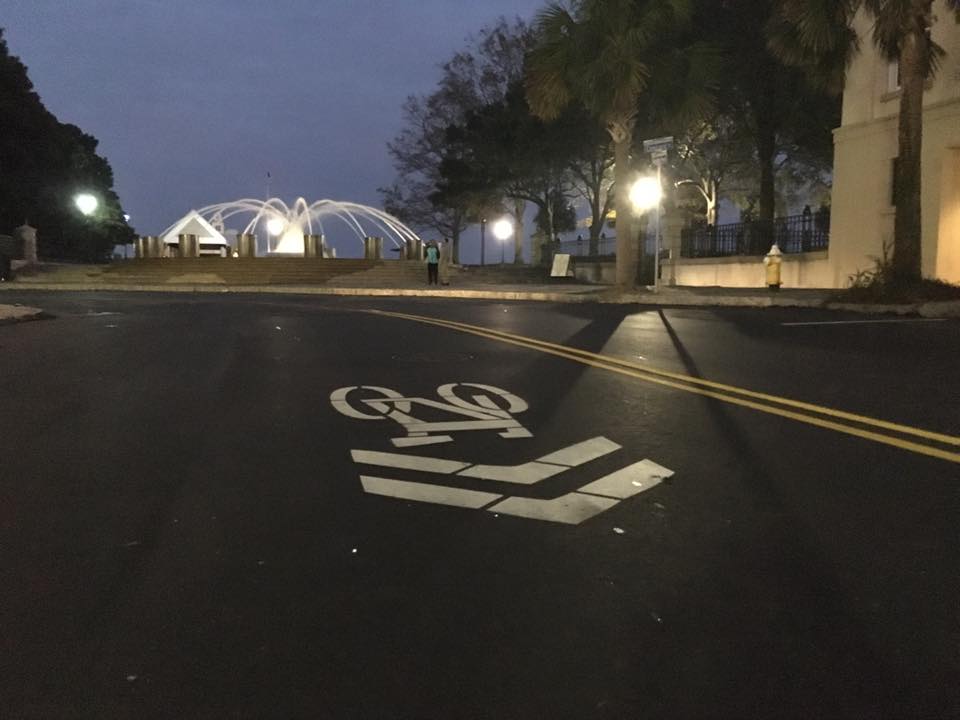